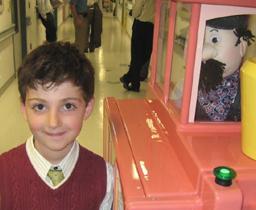 All Aboard! Seven-Year-Old Gives Away ‘Wish’ to Other Young Cancer Patients

A new railroad is running in San Francisco as a result of a volunteer collaboration between Pittsburgh’s Aethon, a maker of courier robots for hospitals, and Daedalus. Through the Make-A-Wish Foundation, seven-year-old leukemia patient, Jericho Rajinger (JR), now has the JR Railroad delivering cheer and medications during patient stays at the University of California San Francisco Children’s Hospital. Jericho thought a robot might make the treatment process if not fun, at least more pleasant for he and other patients. So, Jericho’s robot is about as pleasant looking as possible: a toy train complete with a talking conductor. Aethon donated the courier TUG robot to the Pediatric Center; however, before it could go into service the robot had to shed its institutional character and be transformed into a vehicle to delight children who are dreading their next round of chemotherapy.

Working from a sketch provided by Gensler, San Francisco architects who worked with Jericho on his idea, Daedalus adapted the storybook look of the “Little Engine That Could” to provide an animated conductor, engine, and caboose motorized by the TUG. Medications are carried in the caboose drawers for access by the nurses as it chugs through the oncology unit. The JR Railroad conductor lets children know the train is on its way by calling out "Look out, here I come," "Thanks, from the bottom of my caboose," and "Choo choo, gotta run," with the voice of character actor Don de la Fontaine. Daedalus’s long-time collaborators: model maker Design Specialties, and fabricator Kenson Plastics donated their time to fabricate the railroad. Pittsburgh doll maker, Donna Kearns designed and produced the conductor manikin. Aldo Zini, CEO of Aethon commented, “Aethon is proud to help make Jericho’s Wish come true – for him, and for so many courageous young people. We couldn’t have done it without the efforts of …Daedalus. We are inspired by Jericho’s generosity and compassion for his fellow patients and the work done by the Greater Bay Area Make-A-Wish Foundation. So while UCSF Pediatric Center is the first to implement Jericho’s J.R. robot, it will not be the last. Aethon is going to help fulfill Jericho’s Wish on a national scale by making his TUG available to all children’s hospitals”.