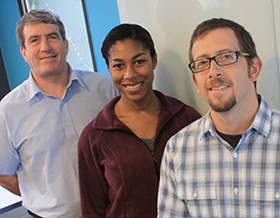 Our client faced a challenge: their wire harness was failing in the field. The operation of the product, intended for use in clinical environments, had individual assemblies that cycled, rotated, opened and closed. This rotational opening and closing put unwanted stress on the wire harness, particularly at the end where it terminated into a connector. Essentially, the product had no built-in strain relief and the rotational forces caused the wire to fail where it was inserted into the connector.

Daedalus was tasked to evaluate the current design, and design a cable-retention device to keep the wire harness from failing in fewer than 50,000 cycles (with minimal impact on current design). We evaluated the entire assembly to determine the root cause of the problem, including the wire harness design. Eight of the client’s original designs acted as a control while we tested eight new Daedalus designs. We designed two parts to clamp the wire harness near the connector, creating a strain relief. The parts fit into the existing design with nominal required changes. In fact, only one component was modified to eliminate two ribs and add two holes for attaching new strain-relief parts. We also changed the wire type and gauge for better flexibility and corrected wire to connector termination. Seven out of eight of the original designs failed well within the 50,000 cycles goal (averaging 28,392 cycles), and the eighth barely passed at 51,021 cycles. However, all eight of the new designs not only reached 50,000 cycles but continued to 100,000 with no failures, exceeding our client’s performance requirement by 100%. We could have stopped at 50,000 cycles but decided to keep going to see if we could double the number. Why? Because we are naturally curious, driven to innovate, and passionate about serving the needs of our clients and end-users alike.
Featured
All
Healthcare
Safety
Scientific
Consumer
Commercial
Training and Facilitation
Interface Design
Industrial Design
Human Factors
Ethnographic Research
Mechanical Engineering
Electrical Engineering
Software Engineering
Full Service Development