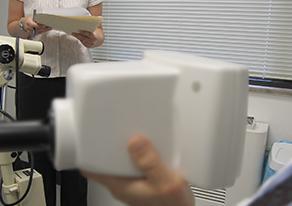 Early detection of cervical cancer and precancers greatly improves patient survival and helps to preserve the reproductive health of women. Our client developed a proprietary technology to quickly identify cancerous cells by analyzing light reflected from the cervix. This technology distinguishes normal from diseased tissue by detecting biochemical and morphological changes at the cellular level. Through use of a handheld device tethered to a medical cart, doctors can quickly perform a non-invasive test – no tissue sample or laboratory analysis is required.

Our research team augmented the client's understanding of the needs and desires of potential users and provided them with information that would inform the development of a commercial device. We conducted both qualitative and quantitative research regarding their cervical cancer detection device, which was undergoing clinical trials at the time. We solicited feedback from OB/GYNs and GYNs who were involved in the clinical trials, as well as doctors new to the technology – OB/GYNs, GYNs, and family practitioners who perform colposcopic procedures, the traditional procedure for testing for cervical cancer involving a directed biopsy of suspect tissue and subsequent laboratory testing. We observed and recorded both traditional colposcopy procedures and clinical trial procedures performed on a training manikin using the cervical cancer detection device. We interviewed the doctors during these procedures and followed up with additional questions while in the examination room and with equipment present. We also conducted quantitative research during a Comprehensive Colposcopy training session by the American Society for Colposcopy and Cervical Pathology (ASCCP). Eighty colposcopists completed a comprehensive survey and 25 also attended focus groups regarding the handheld device, in which they were asked to evaluate the clinical trial device and three handheld prototypes of different ergonomic form factors that had been created by Daedalus industrial designers. Results from our research were presented to our client, which included an organized database of transcribed comments, analyzed data, a presentation of selected and relevant video clips, and an executive report of recommendations for an improved commercial device.
Featured
All
Healthcare
Safety
Scientific
Consumer
Commercial
Training and Facilitation
Interface Design
Industrial Design
Human Factors
Ethnographic Research
Mechanical Engineering
Electrical Engineering
Software Engineering
Full Service Development