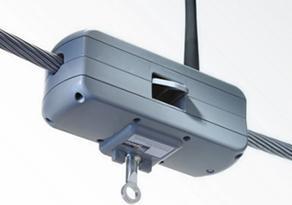 Our client in the utility and telecommunications sector developed an advanced technology to improve the efficiency of testing and monitoring power distribution grids. Our team was chosen to help develop the first alpha and beta prototypes. The medium voltage monitor is a sophisticated sensor that clamps onto existing power lines, continuously senses the current, and transmits that information via wireless networking. After creating a proof of concept prototype, we engineered a field-usable beta prototype with a rugged plastic housing designed to protect the electronics from the elements for up to ten years.

The monitor consists of two C-shaped laminated steel cores that surround a power line, which can range from 1/8" to 1 1/8" in diameter. The ends of the steel cores, exposed for installation, had to be protected from corrosion so seals were deployed when the monitor was clamped onto a wire. We developed the initial proof of concept to rely on a machined metal clamp and slide mechanism. For the beta prototype, our goal was to reduce the overall cost, so we designed injection molded plastic and die-cast aluminum components for the slide and clamp. The plastic used for the housing is UV resistant and able to handle the temperature extremes of its outdoor environment. Holding close tolerances in the plastic assembly was a challenge, due to the relatively large variability in the manufacturing of the laminated steel cores. Additionally, the housing had to stand up to the typically rough handling during installation by the linemen. Now in production, we continue to assist our client as they iterate and enhance the medium voltage monitor's performance.
Featured
All
Healthcare
Safety
Scientific
Consumer
Commercial
Training and Facilitation
Interface Design
Industrial Design
Human Factors
Ethnographic Research
Mechanical Engineering
Electrical Engineering
Software Engineering
Full Service Development