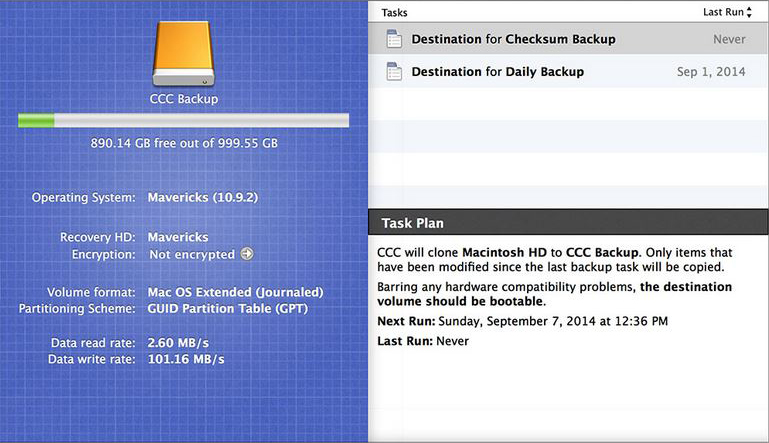 We all know the risk of losing data and applications stored on a computer when the computer hard drive fails. While the first priority is backing up your data, a failed drive can also force you to re-install your operating system and application software, a time consuming and often frustrating process. Cloning software eliminates that risk and worry by backing up the OS and applications as well as user data, creating a bootable drive that gets you back up and running in seconds rather than hours. Drive cloning has been common in IT departments for years, but has been too complex to set up and use for the rest of us.

“It’s the first and so far only backup app that I find truly helps you getting back on your feet within minutes after disaster has struck.”
— IT Enquirer Staff Review, apple.it-enquirer.com

Bombich approached Daedalus to redesign their disk cloning software to address ease of use. The application included many features that were of great value to power users, like IT professionals, but our client had learned through feedback that those same features were overwhelming less experienced users due to their complexity and the number of options available. Our interface designers and software engineers redesigned the user experience with the goal of simplifying the process for the new user, while still providing easy access to those advanced features desired and used by power users.

“I found the interface to be clear and easy to use—it stands out in a market crowded with powerful yet complicated competitors. The advanced features are there if you want them, but remain hidden from view until needed.”

We created a user experience that communicates the steps necessary to quickly and easily make a simple, bootable backup. Large, prominent icons and an intuitive layout guide the user step-by-step through the process, making them aware that "advanced features" exist -- for when they are ready to use them. We also re-thought and redesigned features to eliminate the complexity, and designed new features, like the ability to modify previously specified tasks and to quickly access status updates and features through a Menu Bar App.

“You'll find its well-thought-out menus and controls easy to use even if you're a new Mac OS X user. Its powerful features won't disappoint you, either.”
— Editor Chris Page on Download.com

Daedalus then implemented the software for this new interface, and helped the client integrate it into their application. This included testing and bug tracking to ensure a quality product and user experience. A visually-rich quick start guide was developed to complete the upgrade.

“The interface is so simple, it almost made me weep. Even the “Advanced” capabilities are implemented in such a way that you won’t make a mistake.”
— IT Enquirer Staff Review, apple.it-enquirer.com